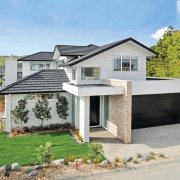 For the older generation“decramastic tiles*” means a scallop-shaped metal tile roof coated with stone chip. The issues that were often attributed to the product have, by some, continued to be associated with the new generation of acrylic, stone chip, metal tiles manufactured today.

The reality is they are totally different products and processes.

The issue of stones coming off the Decramastic roof surface was brought to public attention in 1978 in the NZ program “Fair Go”. What the public was not made aware of was the product in dispute was 15 years old and already superseded by a superior product. Nor were they generally aware that the manufacturer was successful in bringing a defamation claim against the broadcasters for misleading and incorrect statements.

Unfortunately this television program meant the general population became concerned about chip loss on metal tile roofs. But in testimony to the protective nature of the product there are still many of these roofs in service today, 50 years later, that have or can be restored with modern technology.

The idea of the chip coating came from an Englishman, Ben Booth, who developed a process for coating steel sheet with Bitumen onto which sand or grit was applied to prevent the sheets sticking together when stacked. It has been suggested that this was also to reduce glare as a form of camouflage during the wartime period around 1940.

Metal tiles made using this basic coating process were made from the late 1950s on. The first tiles were made in 1957 after Lou Fisher acquired Martile from the Martins.

In 1976 AHI Roofing initiated a major research program with the then modern technology of acrylics. By 1980 the new acrylic based product had replaced the barrier system which used the old Bituminous emulsion. These metal tiles were marketed under the brand Decrabond and New Harveytile.

In 1989 the largest installers of steel roofing tiles in Auckland engaged an engineer and chemist to develop what was to become Metrotile.

Today there are numerous manufactures of pressed metal tiles; Gerard Roofing, Metrotile, Metalcraft Roofing and others. All use similar technology, with some variations in formulation, and none use bituminous products in their manufacture.

Today’s pressed metal tiles use ZINCALUME® as a base with an acrylic coat over laid with natural stone chip with a second coat of acrylic overglaze.

The stone chips used today are similar to the originals with some synthetically coloured chip blended to offer a wider choice of colour combinations.

The range of tile profiles offered in today’s market is extensive. From the traditional to low profile slate and shake products.

While there is some differences between the warranties offered by products and brands most offer a 50 year pro rata warranty.

Cooper Roofing are a proud Gerard Roofing certified roofer, and we offer the full range of Gerard Roof tiles.

Todays tiles are not Decramastic

Todays tiles are not Decramastic